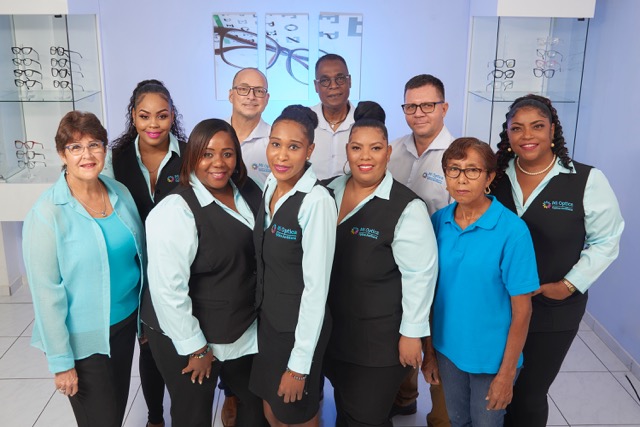 The history of our company begins at Mr. Hugo ‘Bob’ Verbrugge. Around his 20’s, he worked at Spritzer & Fuhrmann as Gold Smith. After 3 years working for them, he quit, and along with his family, he moved to the Netherlands to study for Optician. After successfully ending his study, he continues to work at AMERICAN OPTICAL in Utrecht as branch manager/company director.

After 8 years of experience in the Netherlands, Mr. Verbrugge decided to return to Curaçao along with his family. On 6 December 1978, Optica Antillana Brievengat was founded by Mr. Hugo “Bob” Verbrugge and his wife, Ms. Ana-Maria Verbrugge-Corsen.

In December 2012 Bob passed away, and his son Hugo junior has taken over the store.
Hugo jr. has updated the store by introducing the newest technology on diagnostic eye exams and modern frames with a capable team.

I am born in Sint Martin and went to Radulphus College here in Curaçao.

Went to the Netherlands to study and graduated as a Contact Lens Specialist at ‘Christiaan Huggins School’ in 1991. I’ve been working in the optical industry for over 38 years, and I started working for “de Nie Optiek” in Den Hague back in 1985.

I enjoy helping my patients to have a clearer vision for over three decades here at Optica Antillana.

Born here in Curaçao and with one year old moved to live nine years in the Netherlands.
I started working from my 18th in the Optical Business part-time after school and graduated as an Optician at Zadkine College in 1994.

My staff would probably describe me as the “Funny, easy but serious Boss” –

I’m always up for a challenge when helping patients with complex prescriptions and finding the best frames and lenses for their lifestyles.

Our motto “Providing you with a better life through innovation and preventive eye care solutions” highlights our commitment to providing the highest standard in personalized care, quality, and an amazing array of products. We obtain the most advanced technology and education to benefit our clientele.

I am an optometrist who graduated from Cuba in 2014, practicing in Cuba, Venezuela, and since 2015 in Optica Antillana (Curaçao);

I love my profession because it allows me to help people.  I prefer to work in pediatric optometry because the results will be a definitive investment in our future generation.

Get In Touch With Us Today